I'm a married business executive in my late 30s with a wife in the healthcare industry. We have several children, whose future is our greatest priority. More...

I am neither a lawyer, accountant, nor a certified financial planner. If any ideas seem interesting to you here, please discuss them with your professionally licensed advisor before acting upon them. Otherwise, use them at your own risk.

Here's a quick prosper update.
I've continued to be picky about the loands I've financed and have found it a bit frustrating, however, I realize that most of my frustration is seeking above average interest rates for solid credit borrowers - this is not a realistic expectation as eventually they will seek to refinance leveraging their solid credit.

Despite the objection, I'm following the strategy and have boosted my average interest rate to 14.57% for fairly high credit scoring individuals.

I now have two delinquent loans. One was delinquent straight off the bat, money lent for an on-line school. Prosper says the money is in transit. I have a feeling the initial payment bounced. This is one of my few B-grade risks. The loan value is $99.17 and would put a dent in my average return if I don't increase my lendings.

My goal is to continue lending about $500 per month.

Restraint is the most difficult aspect. I usually want to lend everything right away. One thing I'm learning is to bid near the end of the loan cycle, rather than participate in the interest rate run down on the first of ten days.

Here is a summary of my loans outstanding. 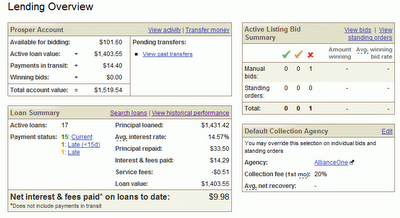 Here is a summary of my loan performance.

I have a positive feeling that the onsite business school will catch up on their payment.

The other loan late was to buy a car for a family member. The borrower works in the brokerage business and was late upon account set-up. I'm going to sit a bit longer before worrying about her loan.

I recently invested in a russian and eastern europe close end mutual fund. It most recently paid a 10% dividend. I wonder which will outperform the other? Prosper or the russian fund?

Later this week I'll transfer over another $500.

Have a great day,

Posted by makingourway at 1:07 PM